The Genius of the Egyptian Personality 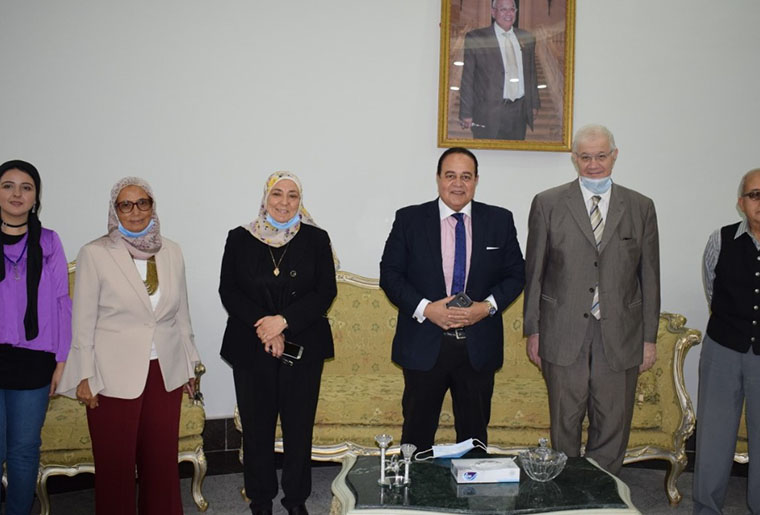 "The Genius of the Egyptian Personality" A symposium by The creative journalist and poet Dr. / Jamal Al-Shaer
2/11/2020

Under the patronage of Prof. Dr. Sherif Fakhry, President of the Egyptian Russian University, and within the activities of awareness youth campaign, the university organized an educational seminar for the journalist and creative poet, Dr. Gamal El-Shaer entitled “The Genius of the Egyptian Personality”. The symposium was held at the university theater within all the precautionary measures needed, and in the presence of the deans of the faculties and a group of faculty staff members and a large group of students from the faculties of Pharmacy, Engineering, Oral and Dental Medicine and the Faculty of Management, Professional Technology and Computers.
Prof. Dr. Sherif Fakhry, President of the University, emphasized in his speech the university’s keenness to hold educational seminars and host influential figures in order to raise awareness among young people, refine their ideas and motivate them to succeed and that the university is honored to host Dr. Jamal Al-Shaer because of his great and honorable contributions in the field of media and fine poetry.
The great poet Dr. Gamal Al-Shaer spoke in his lecture about the Egyptian genius in all fields and throughout the ages, and gave many examples of Egyptian personalities who embodied the “genius of the Egyptian personality” from the era of the Pharaohs to the present generation.
The great poet Dr. Jamal Al-Shaer pointed out that students should take these characters as role models and continue to pursue the dream, regardless of the difficulties they might face, and that the most serious issue that young people face is their fear of the future, and that their greatest enemy is frustration.
He added that the Egyptian youth has a lot of intelligence and abilities, but they need an opportunity to show and exploit them.
During the symposium, he recited many distinctive poems, including a poem that the creative poet had specially prepared for this occasion entitled “Rejoice”. He also recited some of his well-known poems, which were well received by students. Then he opened the door for discussion with students and faculty members.
At the end of the seminar, Prof. Dr. Sherif Fakhry honored the guest and presented him with the university shield.

The Genius of the Egyptian Personality