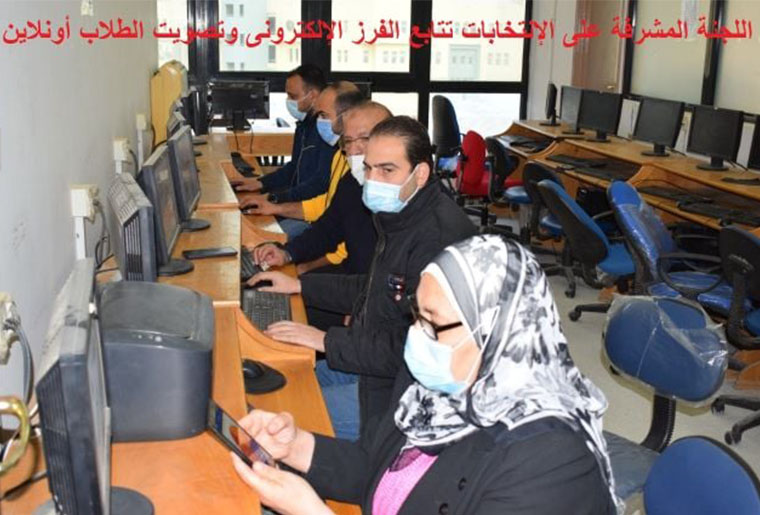 The Egyptian-Russian University Student Union elections were held this year “electronically” in a precedent that is the first of its kind in implementation of the university’s strategy towards digital transformation and transforming the university into a smart university. This comes within the precautionary measures taken by the university to confront the emerging Corona virus, from exchange of student attendance and social distancing on campus.
The university administration launched an electronic referendum among college students before the elections to question their opinions, and accordingly 91% agreed to conduct the elections electronically “online” using the students’ official university email.
On the other hand, Prof. Dr. Sherif Fakhry Mohamed, President of the Egyptian Russian University, added that 134 male and female students had applied for the university’s Student Union elections for the year (2020-2021) of those who met the conditions for nomination in the university’s faculties, noting that the electronic elections in which more than (4,700) participated were to whom the right to vote applies.
The President of the Egyptian Russian University explained that the students used their university e-mail to vote to fill in an electronic form on “Google Form” which gave every student the right to vote once, pointing out that the supervising higher committee was headed by Dr. Ahmed Emad and the membership of Dr. Hana Abdel Rahman, the head of student activities at the university, Imad Farouk, Director of the Information Technology Department, and Muhammad Abdullah, Director of Youth care.
The university president pointed out that the university is keen to take all precautionary and preventive measures, Thus came the keenness to carry out the elections electronically online to prevent crowding and for the Egyptian-Russian University to be at the forefront of Egyptian universities that carry out elections electronically online.
In a related context, Dr. Hana Abdel-Rahman, the head of the student activities at the university, added that three lists are submitted for the Student Union elections, and that the winning list at the Union’s Secretariat won 40.4 % of the votes, the second list got 32% and the third list 26.9 %, which indicates that elections for members of the committees of the union also took place electronically among students of 4 colleges: “Pharmacy, drug manufacturing”,” oral and dental medicine”,” engineering” and” professional technology, and computers”..
Dr.Ahmed Emad, head of the committee supervising the elections, stated that the implementation of the remaining stages of the electoral process will continue according to the timetable that was announced in the elections of committee secretaries and their assistants at the university level on Sunday 27 December, stressing the importance of holding the elections with complete transparency to provide a model for democratic practice and freedom of choice within the university’s faculties and the latest technology to instill it in the minds of students..

announces the results of the university’s first electronic student elections