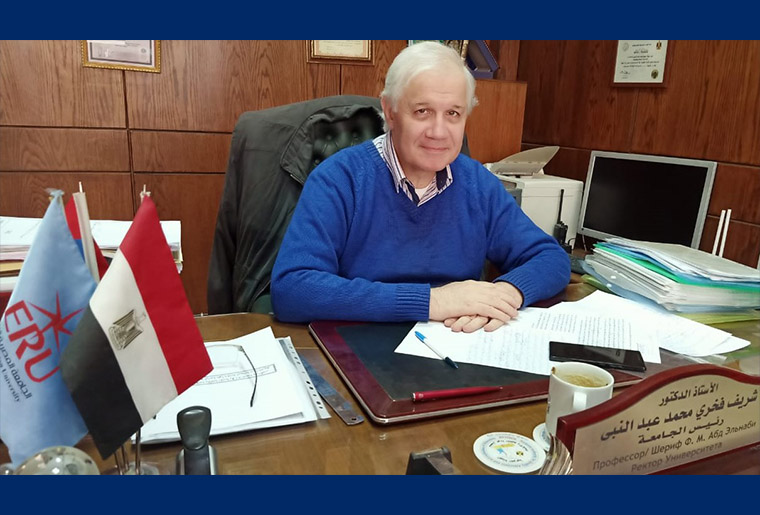 During the midyear vacation, the Egyptian Russian University declares the dates of the student activities. See the conditions for applying.

Dr. Sherif Fakhry, the president of the Egyptian Russian University in Badr City announced that despite the suspension of education; the university administration was keen to communicate with the students during the midyear vacation by continuing student activities among students of the different faculties in the university. This is done by preparing various competitions through the Internet “online” in order to assure the continuation of interaction between students in the artistic and cultural fields to assimilate their creative energies and develop their talents.
Meanwhile, Dr.Hanaa Abdel Rahman, the Pioneer of student activities at the ERU, added that the selection of winners in the competition is going to be done through an opinion poll in which all students of the university’s faculties can vote in the competition. Dr.Hanna noted that valuable prizes have been provided for the first three winners in each competition from the university administration to encourage students to excel and motivate them to succeed. Dr . Hanaa pointed out that the general conditions for the competitions are the following:

2.The competitors’ works will be sent to the following email: [email protected]

4- Voting is done via ‘Google Form’ , and through the official email of each student .

5- Applicants should abide by the conditions of each competition.

6- It is not permissible to participate in more than one competition.

7- Each competitor shall bear the consequences if it is proved that the work he sent to the competition is not his own.

Dr. Hanaa also announced that the competitions are:

A) A video of not more than 3 minutes.

B) The participating student performs in front of the camera himself.

“Design and Graphics”,Photography, Drawing, Arabic calligraphy, and Sculpture,” and the conditions are:

B) The pictures are clear and show the details of the technical work.

C) The number of submitted photos shouldn’t exceed (10) photos for one contestant.

A) The content will be submitted in a “pdf” file.

B) The number of pages of the short story should not exceed (20) pages.

The Pioneer of student activities at the Egyptian Russian University stated that the dates for the competitions schedule are shown in the attached table.

declares the dates of the student activities