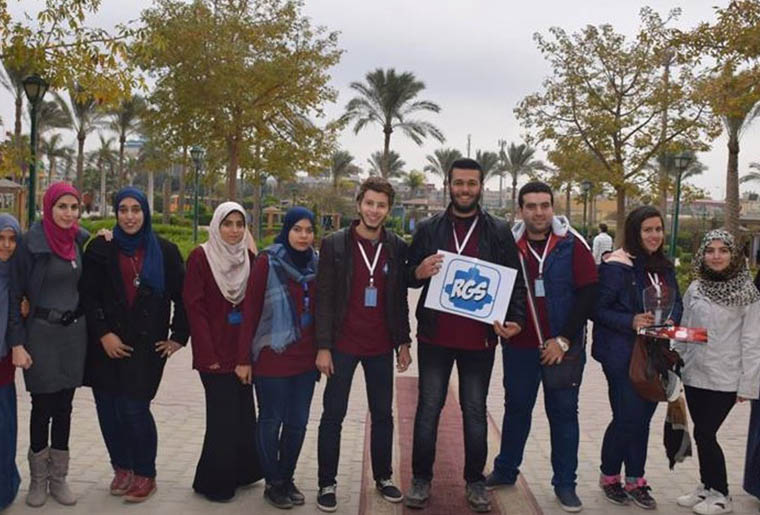 On the occasion of the five-year anniversary of its establishment The Egyptian Russian University reveals the achievements of its student team for Mechatronics and Robotics lovers.

The first team of mechatronics and robotics engineering lovers at the Egyptian Russian University was established in February 2016 from some students of the first year in the “Mechatronics and Robotics Engineering” program at the Faculty of Engineering under the name of “RGS” “Robotics Geek School”. It aims to fulfill their passion for robots and their need to provide means of practical application on what they study in the fields of Robots, electronics, control and programming systems. For competition and exchange of experiences between them in this field, the team has become an applied school for robots whose members of students adabt the notion of self-learning and transfering their practical experiences to their colleagues, especially new members from the first years of study, to ensure the continuity of the team and transfering experiences to successive generations of the faculty Team members.

The team was established based on the proposal of Eng. Mahmoud Sayed (a student in the first year in Mechatronics and Robotics Engineering Program at the Faculty of Engineering at the time) to Prof. Dr. Sherif Fakhry Mohamed Abdel Nabi (Dean of the College of Engineering at the time), and it was welcomed and supported by the college administration. The first members of the team are (Mahmoud Sayed, Asim Rida, Muhammad Ali, Mahmoud Bilal, Hassan Kahla, Muhammad al-Sunbati, Muhammad Alaa, Mahmoud Ahmed, Syed Samir, Imad Fathy, Muhammad Tariq), who graduated from the college in 2019. However, the team is still running with new members joining it every year, who are trained by their elder colleagues.

Prof. Sherif Fakhry Mohamed Abdel Nabi, President of the Egyptian Russian University, stated that the “RGS” team was an inspiration for students and faculty members in the field. It greatly encouraged applying small projects in various courses of Mechatronics, Robotics and Communication Engineering programs in the college, starting from the first year, so that the graduates gain the ability to link the theoretical to practical part of the courses. The significant result of the team was abvious in the graduation project of the founders of the team, in which an old Nasr 127 car was converted into a smart electric car that can be fully controlled remotely using mobile phones, and it has been displayed in many specialized exhibitions.

In the same context, Prof. Dr. Alaa Mohamed Al-Batsh – Dean of the Faculty of Engineering at the Egyptian Russian University stated that the “RGS” team continues to conduct workshops for new students to transfer to them the necessary practical experiences in the field of robotics and mechatronics. Moreover, it conducts competitive events (contests and exhibitions) To urge students to create, innovate and practicaly apply what they study and increase their knowledge in the field. It encourages the students to participate in competations with other engineering educational institutions’ students, including: (Masar Egbary line follower 2019 robot competition, where the robot identifies the predetermined path and automatically walks on it, the football robot competition ” Captain Robot 2020 “where the robot deals and passes the ball to participate with others in a stadium simulating a football playground, the“ RGS Robotics Show ”in 5 consecutive versions (2016-2017-2018-2019-2020) and Science Fair 4 Innovation Exhibition in cooperation with the Higher Technological Institute (in 2019).

On the occasion of the five-year anniversary of its establishment

The Egyptian Russian University reveals the achievements of its student team for Mechatronics and Robotics lovers.