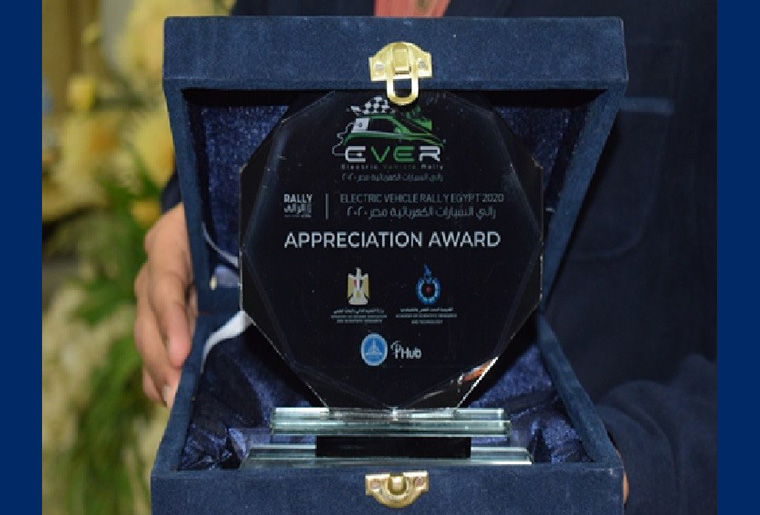 Dr. Sherif Fakhry Mohamed Abdel Nabi, President of the Egyptian Russian University in Cairo in Badr City, announced that the university received a delegation from the organizing committee of the “EVER” home-made electric car rally, which was organized by the Academy of Scientific Research and Technology, in cooperation with Ain Shams University, under the supervision of the ministry of higher education revealing that the committee had handed over the team of the University’s College of Engineering “neutrino”; Who participated in the competition activities for the year (2020), the shield of distinguished participation in the competition in recognition of their unique efforts..

The President of the Egyptian Russian University added that the organizing committee delegation discussed with the university representatives how to overcome the challenges facing the teams participating in the competition, and ways to develop it to reach the best results that benefit graduated students. The aim is to qualify them for the labor market in the field of electric cars … Pointing out that this field is one of the most important engineering fields in the coming period, which is considered the future of the auto market in the world.

In the same context, Dr. Alaa Mohamed Al-Batch, Dean of the Faculty of Engineering at the Egyptian Russian University, affirmed that the aim of the university’s engineering students ’participation in the” home-made electric car rally “competition is to motivate students and innovators to become engineering cadres specialized in this field; To have the ability to design and implement integrated systems based on embedded software, mechanical parts and drive electrical systems that represent the basic components of the electric car industry, and to create an environment that encourages innovation and the manufacture of electric cars and their settlement in Egypt

By the organizing committee of "EVER" competition