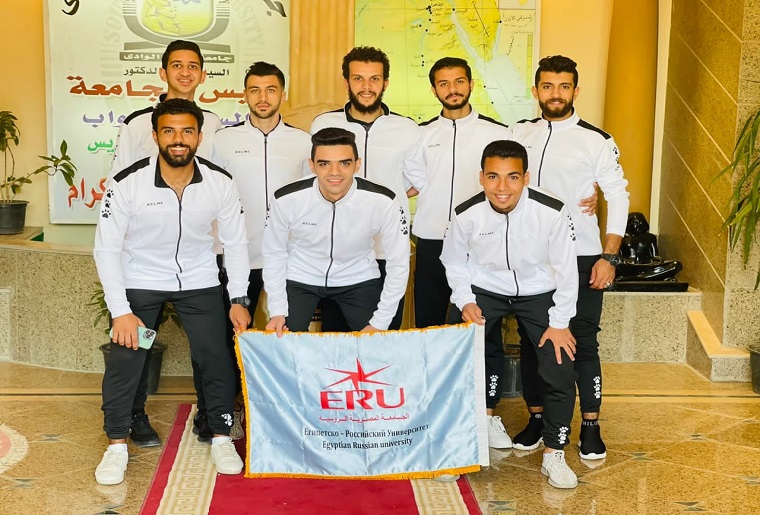 The President of the Egyptian Russian University added that this participation comes within the framework of the university’s vision, interest and active participation in most of the various sports activities of the “local and international” championships; For constant motivation For students to reach the highest levels of sports excellence, in addition to academic and research excellence.. Pointing out that the goal of participation in the tournament is to encourage and develop students’ talents and absorb their energies in line with their inclinations and desires to highlight those talents to society; To make them the nucleus of Egypt’s champions in the future in various sports.

The President of the Egyptian Russian University stated that the university delegation is under the supervision and leadership of Captain Mohamed Abdullah Mustafa,

On her part, Dr. Hana Abdel Rahman, the pioneer of student activities at the university, explained that the team participated in the championship among (31) Arab and Egyptian universities, including private and governmental, including universities from

The “Sultanate of Oman, Palestine, Iraq, and the Kingdom of Jordan”… Adding that the university administration is keen to support all kinds of student activities inside and outside the university campus to enhance students’ talents and employ their energies in what is useful and fruitful, as well as giving them additional skills; That contributes to fair competition with others and self-assessment of students at all local and regional levels.

The pioneer of student activities at the Egyptian Russian University indicated that the university administration provides the ideal environment to discover talents and highlight them at the internal and external levels, to help build a university sports generation with good morals in addition to providing the opportunity for the largest possible number of students to practice sports activities and to satisfy Their inclinations to be engaged in these effective and useful activities, which aim at strengthening social relationships between students, and enhancing the spirit of teamwork, which has the greatest impact on strengthening social relations,  ties between university faculties and different universities, as well as between the university and  different sports clubs and various sports bodies (organizations).