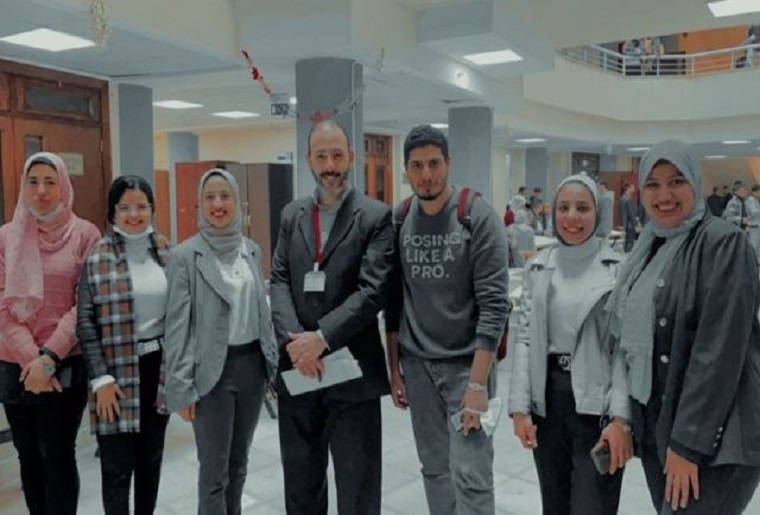 Dr. Sherif Fakhry Mohamed Abdel-Nabi, President of the Egyptian Russian University, announced that Dr. Tamer Saleh El-Sayed Mostafa, a lecturer in the Telecommunication Department at the Faculty of Engineering at the university, was honored from the Journal of Nanophotonics and Optical Engineering magazine, for his efforts as a reviewer for the scientific researches published in them. He pointed out that this honor comes out of Dr. Tamer’s distinguished experiences in the field of Telecommunication and Electronic Engineering sciences.

It is worth noting that Dr. Tamer Saleh’s specialization has an important impact on the future of telecommunication, as the operation of data transmission and reception requires high transmission speeds that electronic circuits are unable to achieve. Therefore, optical fibers were used to transmit data through light instead of the usual electrical signals. Consequently, the need to replace The current electronic circuits with other circuits that work entirely with light instead of making a switch between electrical and optical signals. Dr. Tamer designed some of those circuits with insulating materials, which are characterized by their small size, estimated at nanometer dimensions, to direct the spread of light in certain paths to achieve specific functions. Due to the use of Light which is characterized by its high speed of data transmission, transferring the so-called big data within a second while saving the energy used in the operation of these circuits can be executed.

In the same context, Dr. Alaa El-Batsh, Dean of the Faculty of Engineering at the Egyptian Russian University, added that honoring Dr. Tamer Saleh for his great effort in reviewing researches published in the two scientific journals represents one of the activities of the faculty members who are distinguished by their expertise in unique specializations at the level of Egyptian and international universities. He explained that their achievements appear in various scientific and research fields; the faculty and the whole university are pleased with their successes.

Dr. Tamer Saleh” worked in many institutions that contributed in expanding his field of expertise, like the Ministry of Industry, Helwan University, King Khalid University in Saudi Arabia, and the Egyptian Russian University which qualified him to become the Executive Director of the Huawei Academy at the Egyptian Russian University. It took the second place among Huawei academies in private universities whose distinguished members, whether trainers or trainees, are ranked among the first top ten at the level of Huawei academies in Egypt.

Dr. Tamer Saleh has published a number of research papers in prestigious international and local journals and won the first place in the largest conference in Egypt, the “Radio Science” conference, which is held annually.  To stand out his remarkable scientific history, he become a reviewer for some international journals, which praised his efficiency and awarded him a certificate of appreciation for his work with them throughout the past year.

Hence, Dr. Tamer Sale has an educational channel on YouTube, which is viewed by students of the College of Engineering from around the world https://www.youtube.com/channel/UC_vUNK1odX36j6WcHOx1MkA. He has a great deal of designing, manufacturing and maintaining electronic circuits besides his participation in many local competitions, and organization to a number of conferences and exhibitions for periodic projects in the Egyptian Russian University.