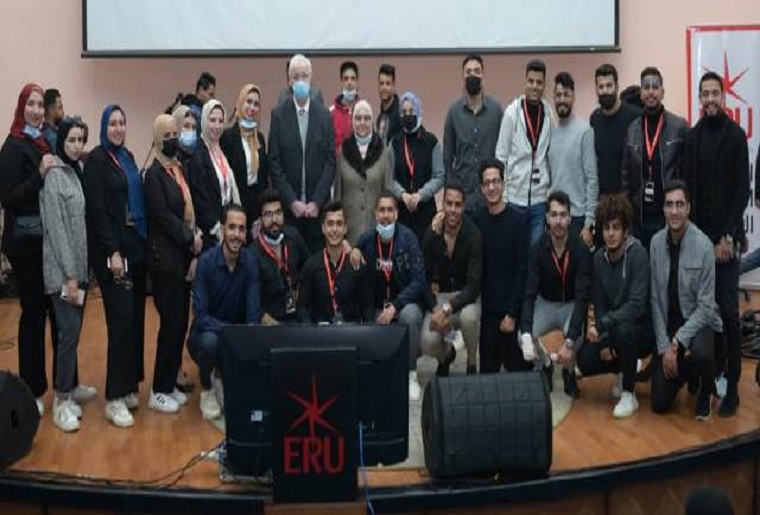 Prof. Dr. Sherif Fakhry Muhammad Abdel Nabi, President of the Egyptian-Russian University, stated that the university administration honored 84 students who excelled academically in the various faculties of the university at all academic levels for the academic year 2020-2021. He also pointed out that this celebration is in line with the university’s strategy to support and motivate students to continue with their success and scientific excellence, as well as to encourage the rest of the students to follow their footsteps and exert the needed effort to excel. He further stressed that students should possess both the knowledge and the ethics since they are the basis of “success and excellence” and building nations. Prof. Dr. Sherif in the end wished all a prosperous future and an active participation in developing the society and achieving sustainable development of our beloved country, Egypt.

In the same context, Prof. Dr. Muhammad Ihab Fattouh, Dean of the Faculty of Pharmacy at the Egyptian-Russian University, invited all students to manage their time well among the different student activities and studying whether in the theoretical lectures or in the practical studies in the labs, so that they become outstanding graduates. He also pointed out that the faculty administration provides a suitable environment of quality education for the students to help them “succeed and excel” so that they are capable of meeting the needs of the job market on the local, regional, and international levels.

From his side, Prof. Dr. Khaled Tawfik, Dean of the Faculty of Oral and Dental Medicine at the Egyptian-Russian University, said that he is glad for honoring this large number of excellent students. He also sent his salutation to the honored students and their parents and families attending the celebration who spent nights and showed great support to their sons and daughters till they stood on the stage as honorees for academic excellence. In addition, he alluded that all students should arms themselves with both the knowledge and the good morals, being the basis of the success and the elevation of the society.

Along the same line, Prof. Dr. Alaa El Batsh, Dean of the Faculty of Engineering at the Egyptian-Russian University, expressed his appreciation to the top students for their academic excellence. He also greeted their parents who guided them to reach this success. He noted that the Faculty of Engineering is characterized by having multiple programs and tracks, which are indispensable for any facility, whether administrative, commercial, economic, private, or governmental. It also qualifies students to work as freelance engineers.

From her side, Dr. Hanaa Abdel Rahman, Head of Student Activities at the Egyptian-Russian University and the organizer of the event, advised students to actively participate in the student activities due to their major role in building the character of the university student and enhancing his/her skills, a complementary part of the education process. She revealed the names of the honorees who are as follows:

It is worth mentioning that the chorus of the Egyptian-Russian University led the ceremony of honoring the excellent students, which spread an atmosphere of joy among the audience. Note also that the chorus team is preparing for their participation at the tenth season of “Ibda’a Festival,” organized by the “Ministry of Youth and Sports.” The chorus of the Egyptian-Russian University consists of the following members: