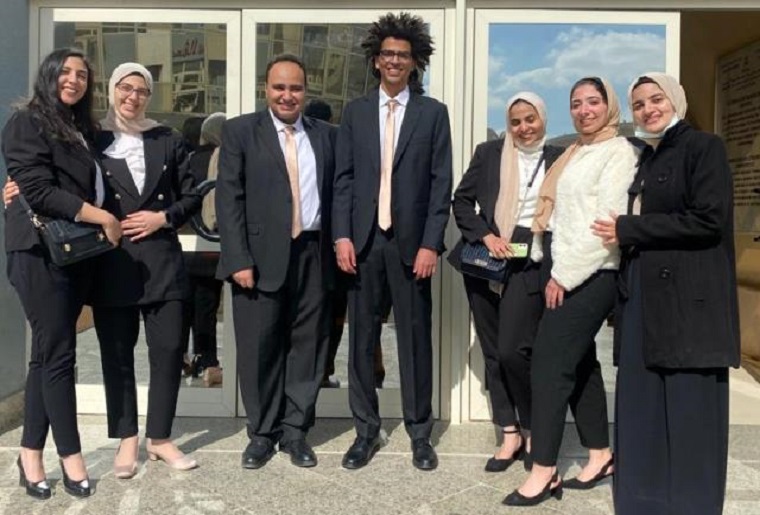 Prof. Dr. Sherif Fakhry Mohamed Abdel-Nabi, President of the Egyptian Russian University, in Cairo, Badr City, announced the selection of the undergraduate student “Mustafa Tarek Youssef” from the Communication department at the Faculty of Engineering within the team consisting of 3 students which represents ” Egypt” in the African continent qualifiers and is qualified for the final stages of the competition of the global telecom company “Huawei” in the capital “Beijing” in the State of China for the academic year (2021-2022).

The President of the Egyptian Russian University added that the student Mustafa Tariq Youssef in the Department of Communications at the Faculty of Engineering is one of the university’s talented students in the field of communication and information technology, and he was chosen from among 2000 male and female students who participated in the competition from all the prestigious Egyptian universities: governmental, private, and national. Students were filtered to a team of 3 only to represent Egypt in the final qualifiers of the competition in Beijing. He pointed out that the competition aims to discover and nurture local talents in the field of information and communications technology, refine their skills, prepare them to lead the technical future and contribute in achieving digital transformation plans and developing strategies that rely on information technology.

In the same context, Prof. Dr. Alaa Mohamed Ahmed Al-Batsh, Dean of the Faculty of Engineering at the Egyptian Russian University, clarified that the university signed a cooperation protocol with “Huawei” during the past year, upon which the “Huawei Academy” was established on the university campus to be among the first universities cooperating with the company in academic activities. This cooperation has many benefits for students specializing in information systems within the university’s faculties. He pointed out that the students were followed up well by Prof. Dr. Shaima Mustafa, the head of the Communications Department at the Faculty of Engineering, Professors and teaching assistants staff in the department.

For his part, Prof. Dr. Hisham Fathy, Dean of the Faculty of Artificial Intelligence and Computing and General Supervisor of the Huawei Academy at the university, confirmed that the student Mustafa Tariq Youssef performed well among all the participants in the competition until he was able to join the team that will represent Egypt in the final qualifiers in Africa, which succeeded with a score of “960/1000”. He explained that student was honored by the university for obtaining the international certificate of the HCIA-AI course, as well as the international certificate in networks. The student was trained under the supervision of Dr. Tamer Saleh, Executive Director of the Academy. The student also obtained a number of international certificates from the company through self-learning, which led to raising his points among the contestants and qualifying him for the final qualifiers.

Moreover, Dr. Tamer Saleh, an associate professor in the Department of Communications at the Faculty of Engineering and the Executive Director of the Huawei Academy at the university, said that the protocol with the global “Huawei” provides an opportunity to train a number of distinguished lecturers and teaching assistants staff to obtain the international certificate of the company in order to become certified trainers inside the university, especially in the field of information technology. This field has become a vital area to lead the development of societies. In addition, he revealed that the provisions of the protocol include the establishment of a center for training students from inside and outside the university to benefit the local community and the neighboring cities of the university in Badr city.

Dr. Tamer Saleh stated that this success encourages the university to continue its approach in motivating its students to participate in various forums, whether local or international that have a hand in developing their creative thinking skills, bridging the gap between theoretical education and practical experience, cultivating their spirit of innovation, following up on every scientific development, expanding their self-learning methods instead of being satisfied with the traditional educating methods and working on their integration with advanced technology.

It is worth noting that the student Mustafa Tariq Youssef is the team leader for the “RGS” team at the university under the supervision of Dr. Tamer Saleh. This team is entrusted with robots, as it participates in all competitions locally or internationally in this field. Thus, the student has proved his success in managing this team.