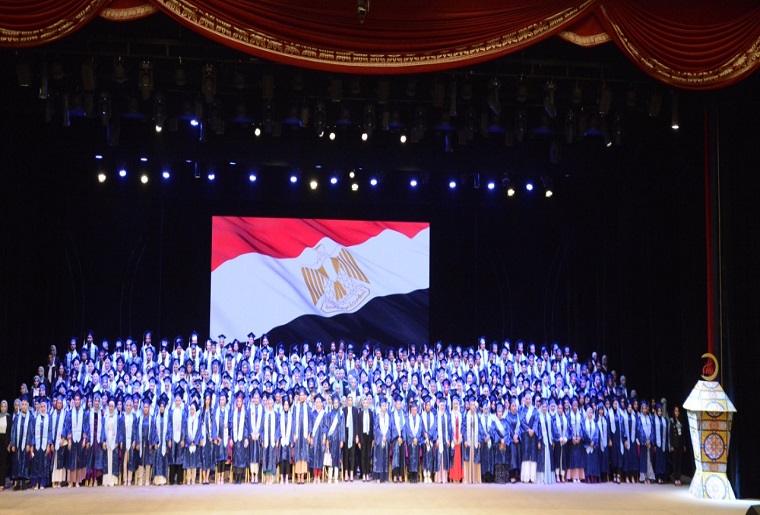 Under the auspices of Dr. Mohamed Kamal El-Sayed Mostafa, Chairman of the Board of Trustees of the Egyptian Russian University. And Prof. Dr. Sherif Fakhry Muhammad Abdul-Nabi, President of the University, the Egyptian Russian University celebrated the graduation of three classes of students who were awarded the bachelor’s degree from the Faculties of Pharmacy and Engineering, in the great hall of Al-Manara Conference Center, in which staff members and deans of the university participated.
The ceremony was attended by a group of distinguished guests:
– Prof. Taya Abdullatif, Advisor of the Minister of Higher Education for Student Activities
– Prof. Dr. Muhammad Al-Ghamri Al-Shawadfi, Advisor of the Minister of Higher Education
– Prof. Dr. Maher El Domyati, Chairman of the Pharmaceutical Studies Sector Committee at the Supreme Council of Universities
– Major General Staff of the War, Ihab El-Far, Head of the Engineering Authority of the Armed Forces
– Engineer Tariq Al-Nabrawi, Head of Engineering Syndicate.
– Prof. Dr. Ahmed Attia Saada, Chairman of the Board of Directors of the Egyptian Pharmaceutical Association and former President of 6 October University
– Dr. Essam Abdel Hamid, Deputy of the General Syndicate of Pharmacists
– Eng. Said Faraj Azer, Chairman of the Board of Directors of Sebamatic Dynamic Industries
– Prof. Azza Agha, formerly Vice President of the National Authority for Quality Assurance and Accreditation
Dr. Fathi Toghan, Secretary General of the Egyptian Association of Alumni of Russian and Soviet Universities
– Major General Staff of the War Yahya Zakaria, chief of teaching staff of the Military Technical College
The ceremony was also attended by many deans of the faculties of pharmacy and engineering in Egyptian universities.
By reciting the professional pledge, the graduates announced the start of their career, with best wishes from everyone for a prosperous future.