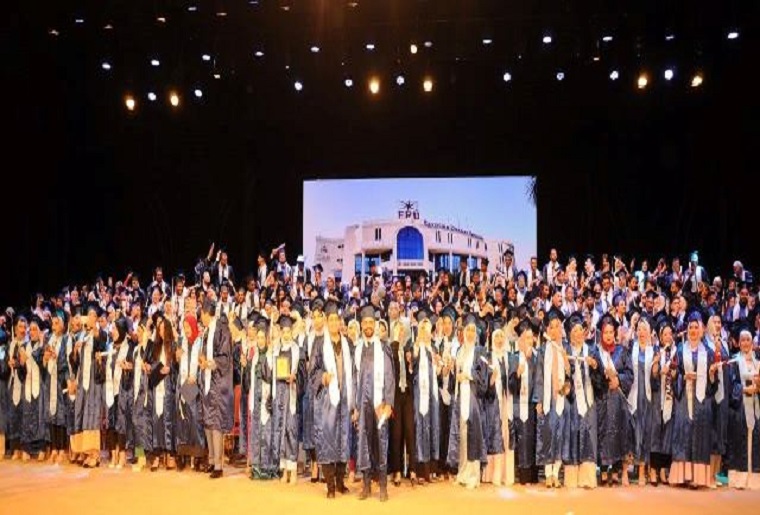 The Egyptian-Russian University in Badr City celebrated the graduation of Bachelor’s degree students of the academic years of 2019, 2020, and 2021 from the Faculties of Pharmacy and Engineering. The celebration was held in the great hall of “Al-Manara Conference Center” in the Fifth Settlement. It witnessed the participation of the university’s teaching staff and the presence of representatives of the Ministry of Higher Education and Scientific Research, along with a selection of businessmen, public figures, and parents, with the support of Prof. Dr. Muhammad Kamal Elsayed Mostafa, Head of the Board of Trustees of the Egyptian-Russian University, and under the patronage of Prof. Dr. Sherif Fakhry, President of the University.

Prof. Dr. Sherif Fakhry Muhammad Abdel-Nabi, President of the Egyptian-Russian University, expressed his delight in graduating three batches of the Faculties of Pharmacy and Engineering, wishing everyone a prosperous future. He also thanked all the faculty members of the Faculties of Pharmacy and Engineering for their keenness in providing quality education and not skimping on their knowledge and experience until they helped in the graduation of distinguished “pharmacists and engineers” to the practical life and its challenges, whether they were at “the local or the international” level. He also sent his greetings to the parents and families who stayed up with their children, exerted much effort, and spent money until they reached this beautiful moment that every student’s father and mother wishes to witness during their lifetime.

In the same context, Dr. Khaled Tawfik, Dean of the Faculty of Oral and Dental Medicine at the Egyptian-Russian University, delivered a speech during the celebration on behalf of the President of the University, in which he thanked the university leaders for all the support they provide to the students so that they reach these happy moments. He also called for “Pharmacy and Engineering” graduates to show sincerity and dedication towards work and to ensure continuous research and learning, to keep up with everything new in the field of their profession, and to communicate with their university to know the latest scientific findings in their fields to be permanently distinguished in their professional lives.

For his part, Dr. Muhammad Ihab Fattouh, Dean of the Faculty of Pharmacy at the Egyptian-Russian University, added that he continuously monitors the graduates of the faculty after their graduation through the Graduate Follow-up Unit in the faculty, in order to know what positions they occupy in many prestigious establishments and companies due to their excellence and well-preparedness inside the college campus. He further indicated that the university leaders will always be happy to receive them, to benefit from the possibilities of “postgraduate studies, research, libraries, workshops, conferences, seminars, or any complementary courses” that help them in the labor market, to keep up with everything new in their profession.

In a related context, Dr. Alaa El-Batsh, Dean of the Faculty of Engineering at the Egyptian-Russian University, explained that the certificates obtained by graduates are among the most important documents they will ever obtain in their lives because they will open the doors of success for them in practical life, whether inside or outside Egypt. He asked the graduates during the celebration to stand up to salute their families who stayed up with their children, exerted effort, and spent money so that each graduate achieves what he/she wishes to start real experience in fieldwork after learning well the basics of engineering sciences in the various departments of the faculty.

For her part, Professor Ikram Muhammad Abdel-Hamid, Secretary-General of the Egyptian-Russian University, praised the new graduates who not only worked hard in their studies but also showed determination to achieve their ambitions, despite the difficult conditions that the country and the world have been going through due to the “Coronavirus” pandemic for more than two years, proving their excellence through success in the Bachelor’s degree. She explained that the university administration is making great efforts to achieve quality in all aspects of academic, research, and administrative life as well as student activities throughout the academic year, to provide a rich institutional educational experience that depends on the successful application of modern technologies, and to offer distinctive and advanced educational programs for the university students.

It is worth noting that the graduation ceremony was witnessed by:

– Dr. Taye Abdel-Latif, Advisor to the Minister of Higher Education for Student Activities.

– Dr. Maher El-Domyati, Chairman of the Pharmaceutical Studies Sector Committee at the Supreme Council of Universities.

– Major General Ihab El-Far, Head of the Engineering Authority of the Armed Forces.

– Engineer Tariq El-Nabrawy, Head of the Syndicate of Engineers.

– Dr. Ahmed Attia Saada, Chairman of the Board of Directors of the Egyptian Pharmaceutical Association and former President of 6 October University.

– Eng. Said Farag Azer, Chairman of the Board of Directors of Sebmatic Company for Dynamic Industries.

– Dr. Essam Abdel-Hamid, Deputy of the General Syndicate of Pharmacists.

– A group of deans of the faculties of pharmacy and engineering in public and private universities,

– Dr. Fathy Toghan, Secretary-General of the Egyptian Association of Alumni of Russian and Soviet Universities.

– A group of businessmen, deans of faculties, university faculty members, and public figures.