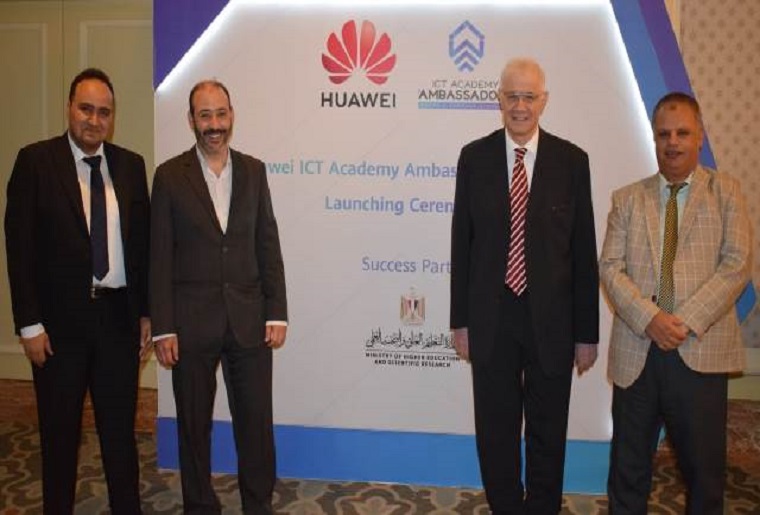 Prof. Dr. Sherif Fakhry Mohamed Abdel Nabi, President of the Egyptian Russian University in Badr City, Cairo Governorate, announced that Mustafa Tarek Youssef, a senior student in the department of Communication at the Faculty of Engineering at the university, seized the third place in the world after excelling over 130 competing teams from 43 countries in Huawei International Competition for Information and Communication Technology 2021-2022. The competition was held in the capital “Beijing” in the State of China, and its activities were concluded on June 25, noting that the student joined the competition with the full support of Dr. Mohamed Kamal Mustafa, Chairman of the Board of Directors University trustees.

The President of the Egyptian Russian University added that the student is one of the talented students in the field of communication and information technology, and he was chosen from among 2000 students, from all the prestigious Egyptian universities whether governmental, private or national universities, to participate in this competition. The participants were eliminated so that a team consisting of 3 students only was qualified in the “cloud” field to represent Egypt in the finalist in the African continent in the final of the competition in “Beijing”.

In the sane context, Prof. Dr. Alaa Mohamed Ahmed Al-Batsh, Dean of the Faculty of Engineering at the Egyptian Russian University, explained that the competition aims to discover and nurture local talents in the field of information and communications technology to refine their skills and prepare them to be leaders of the technical future and contribute to achieving digital transformation plans and developing strategies that rely on information technology. According Prof. Dr. Alaa Mohamed Ahmed Al-Batsh, the university signed a cooperation protocol with “Huawei” during the past year, through which the “Huawei Academy” was established inside the university campus making the Egyptian Russian University among the first universities to cooperate with the company in academic activities. Subsequently, information systems’ students within the university’s faculties will benefit from this cooperation.

Prof. Dr. Hisham Fathy, Dean of the Faculty of Artificial Intelligence and Computing and General Supervisor of the Huawei Academy at the university, confirmed that Mustafa Tariq did a good job among all the participants in joining the team of 3 students, which represented Egypt in the finalist with a score of “960/1000”. In addition, Prof. Dr. Hisham Fathy, explained that the goal of establishing the academy is to develop the skills of the university students, qualify them to participate in international competitions, transfer technological knowledge to them, and train students of different ages from outside the university or graduates of other faculties and institutes by international experts from Huawei. This training aids them to obtain accredited certificates by a competent authority in the “regional and international” labor market to qualify them for job opportunities in the field of modern technologies and advanced technology owned by major companies such as Huawei.

In the same regard, Dr. Tamer Saleh, an Assistant Professor at the Communication Department at the faculty of Engineering and the Executive Director of Huawei Academy at the university, clarified that the university honored the student for obtaining the international certificate in the HCIA-AI course, the international certificate in networks, and a number of international certificates from the company through self-learning, which led to raising his points among the contestants and qualifying him for the finals. The selection of two university coaches: “Engineer Rehab Hassan and Engineer Mustafa Gamal”, among the best (10) trainers in the field of networks and Cloud in Egypt, and winning three silver and bronze medals in the competition’s preliminary qualifiers were among the upsides of the university’s cooperation with Huawei, according to Dr. Tamer Saleh.

Stating that the “Huawei ICT competition” is presented by the international Huawei ICT Academy, and it is held worldwide in communications and information technology aiming to obtain the best talents from students in the fields of communications in the faculty, especially from the departments of Communication Engineering, Information Technology, Computers and Information.

Mostafa Tarek, the first ranked student among the ambassadors of Huawei academies in Egypt, indicated that his experience with Huawei HCIA Scholarship Program is more than fascinating and he deeply benefited from it. He noted that he chose the HCIA-CLOUD COMPUTING course which was jis first experience with Huawei. He passed the exam in the 9th of August 2021 with a score of 960/1000. In addition, he illustrated that he was one of the first applicants to Huawei Academy at the Egyptian Russian University and that the Academy provided him with an artificial intelligence course under the supervision of Dr. Tamer Saleh and Engineer Mustafa Gamal. The Academy provided him with a new opportunity to obtain the HCIA-Routing and Switching International Certificate. He was enrolled in the “Cloud Track” competition, which included the areas of: Big Data, Cloud Computing, Cloud Services, Storage, AI.

Mostafa Tarek, the 3rd ranked student in the world in Huawei competition clarified that the placement test ended with the selection of the top 500 students, and after that the final exam was held through which he was chosen from the top 9 students in the field of “Cloud”. The final stage of the qualifications began at the level of Egypt last January, and he obtained 3 certificates in this stage: “HCIA, Big Data, HCIA Storage & HCIA, Cloud Services” and the qualifications ended in 6th of March. He was selected among the team of 3 students to represent Egypt at the North African level in a ceremony held to honor the winners at the company’s headquarters in the “Smart Village.” Furthermore, the competition’s exam was held at the North African level in 26th of April, and he was qualified for the final competition worldwide. Last but not least, the final exam was held on 18th of June, which was lasted for 8 hours, and the team won the third prize worldwide.

It is worth mentioning that the student “Mustafa Tariq Youssef” is the team leader of the “RGS” team at the university under the supervision of Dr. Tamer Saleh. This team is entrusted with robots and it participates in all competitions in this field at local and international levels, in which the student has proven great efficiency in its management.