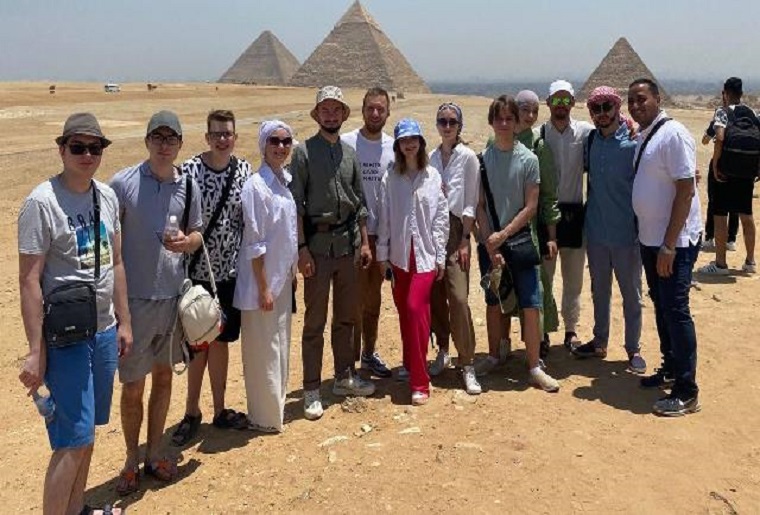 Prof. Dr. Sherif Fakhry Mohamed Abd Elnabi, president of the Egyptian Russian University, revealed that the university campus received a student delegation from Russia as part of the student training program on the use of the Arabic language and familiarization with the historical places in Cairo and its surroundings, history, culture, and Egyptian traditions which the university offers to the students of the Russian universities through the cooperation agreements signed with it with the aim of strengthening joint cultural and scientific relations and activating student exchange, due to its great role in building bridges of communication and openness to foreign cultures and deepening relations between the Egyptian State, Egyptians, and the peoples of the Russian Federation. Noting that hosting the student delegation with full support of Dr. Mohamed Kamal Mustafa, Chairman of the Council University Trustees.

The president of the Egyptian Russian University added that the university provided lectures for the student delegation from the “People’s Friendship University in Moscow” to train on the use of the Arabic language and to learn about Egyptian antiquities. Noting that this visit represents the university’s contribution to develop the Egyptian smooth power through giving the opportunity for Russian students who are learning Arabic language to train on its use in “Egypt”, while at the same time introducing them in a practical way to the archeology, history, culture, and traditions of Egypt, as the university believes that this makes them more understanding of the conditions of the Egyptian state and the hopes of the Egyptians which will be reflected in their decisions and dealings with “Egypt” in their future working lives.

For her part, Mrs. Ikram Mohamed Abd Elhamid, Secretary General of the Egyptian Russian University stated that the supervisor of the training who will accompany the student delegation during their stay in Cairo which lasts for a month is Mr. Mohamed Saber, the Russian language teacher at the university, noting that the university provided all the basic needs of students during their stay in Egypt including housing, training, and entertainment. Moreover, a busy program has been prepared over the course of the students’ stay that includes many visits in the most beautiful Egyptian areas and landmarks, whether cultural, touristic or recreational.

On the same subject, Dr. Hanaa Abd Al- Rahman the leader of student activities at the Egyptian Russian University indicated that the program of the visit of the Russian student delegation inside the university campus included attending some lectures with their Egyptian peers with the aim of achieving rapprochement, integration, and interaction with the Egyptian society and enriching their experience. The students of the Russian delegation attended a lecture with the students of the Faculty of Administration, Economics and Business Technology in a political science course entitled “Studying Political Phenomena in a Scientific Way” by Dr. Ahmed El-Basousy, a lecturer of political science at the Egyptian Russian University, in which he dealt with the importance of research methods in political science, its types, and how to use these approaches giving some examples. He also referred to the difference between a researcher in political science and a journalist, and the way each of them works. In addition to talking about the importance of studying theories in studying political phenomena.

The program also included attending a lecture in the course of “International Economics” entitled “Closed Economy”, in which Dr. Engy Raouf, Assistant Professor of economics at the university dealt with several axes, including: The meaning of closed economy, how to determine the general equilibrium in a closed economy, and how to maximize benefit and profit within this system.

In a related context, the students expressed their happiness to visit Egypt and the warm reception and training them to use Arabic language at the Egyptian Russian University as well as giving them the opportunity to get acquainted with the Egyptian and Arab culture closely, and that the visit program was adequate, and that the university administration provided them with all means of comfort, explaining that they are ready to exert a great effort to learn the “Arabic Language” and make their own contributions to spread culture and strengthen the bonds of Arab friendship with the state of “Russia”.

They wished to work as ambassadors in the “Ministry of Foreign Affairs” of their country, especially in a country in the Arab region or the Middle East, after their useful and enjoyable visit to Egypt, their second country.