The Egyptian Russian University celebrates the victory of October in the presence of the crazy pilot and the stun ghost. 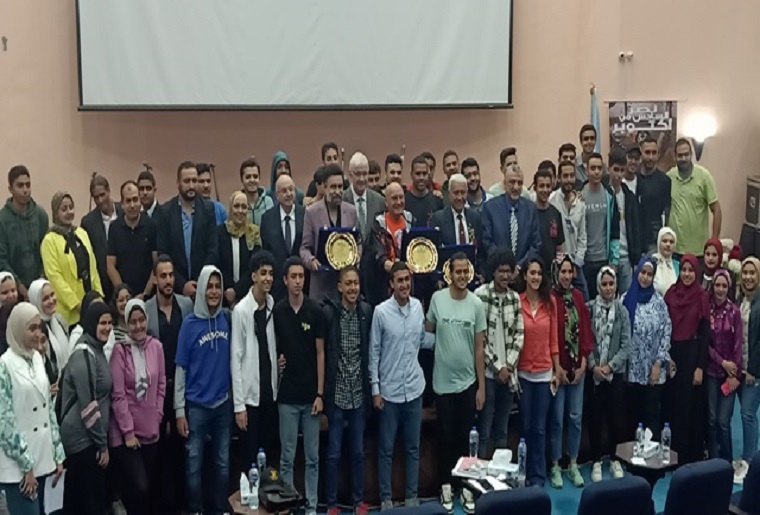 The Egyptian Russian University celebrates the victory of October in the presence of the crazy pilot and the stun ghost .

Prof. Dr. Sherif Fakhry Mohamed Abdel Nabi, President of the Egyptian Russian University, announced that the university administration held a celebration in the great conference hall “Prof. Dr. Sherif Helmy Hall”, on the occasion of the forty-ninth anniversary of the glorious October 6 victories, under the slogan “My homeland is the land of pride and dignity”, referring to The celebration was held with the full support of Dr. Mohamed Kamal Mustafa, Chairman of the University’s Board of Trustees.

The President of the Egyptian Russian University explained that the presidency of the university is keen to revive this occasion every academic year in order to enhance belonging among students, spread awareness and national culture, consolidate their participation in the development process and remind them of their ancient history, the struggle of the Egyptian people and the endless heroisms of the “armed forces”. He explained that the October victory will remain a source of pride and pride, as the masses of the Egyptian people turned around their armed forces, which set the most wonderful examples of redemption, steadfastness and sacrifice, in which each of the people and the armed forces played their role perfectly, creating a national epic that tells immortal stories of heroism, glory and success. ….. His Excellency indicated that this year’s celebration was honored to host two heroes of the October War, who had a clear imprint in the war. They are Major General Pilot/ Ahmed Al-Mansoori of the Air Forces, and Major General Dr. Engineer/ Moataz Al-Sharqawi of the stun troops, where they listed many stories of heroism and sacrifices for the brave soldiers of Egypt. They sent a message to the students that the youth of Egypt in the October War were the ones who crossed the canal and liberated the land, and that the youth today have the same role in protecting their country and raising its status

In the same context, Prof. Dr. Essam Khamis, Vice President of the Egyptian Russian University, added that the October victory was not a coincidence, as it was the result of good preparation, careful planning, serious training and perseverance in implementation from the “Egyptian Armed Forces”, accompanied by the firm belief that victory is from God. And the certainty that every Egyptian man and woman possessed, despite the enormity and strength of the enemy, which led to successes that history will remember in the world.

For her part, Prof. Dr. Hana Abdel Rahman, the pioneer of student activities at the Egyptian Russian University, stressed the importance of students and new generations to know the history of the fathers and grandfathers who participated in the “October victories” managing the unity of the Egyptian people and their armed forces. She added that the October victory will always be a source of pride and honor. For the Egyptians, the men of the “Egyptian Armed Forces” are the nation’s shield and fortress to confront any attempts to harm its land, security and stability throughout history.

The celebrations of the 49th anniversary of the glorious October 6 victories were attended by: “Professor Tariq Bilal, Chairman of the Board of Trustees of the Educational Administration of the cities of Al-Shorouk, Badr, and Gardens of the Capital, a large number of faculties’ deans, members of the university’s faculty and the supporting staff, students from all university faculties, and public figures”, The ceremony included many patriotic songs performed by the university choir team.

The Egyptian Russian University celebrates the victory of October in the presence of the crazy pilot and the stun ghost .