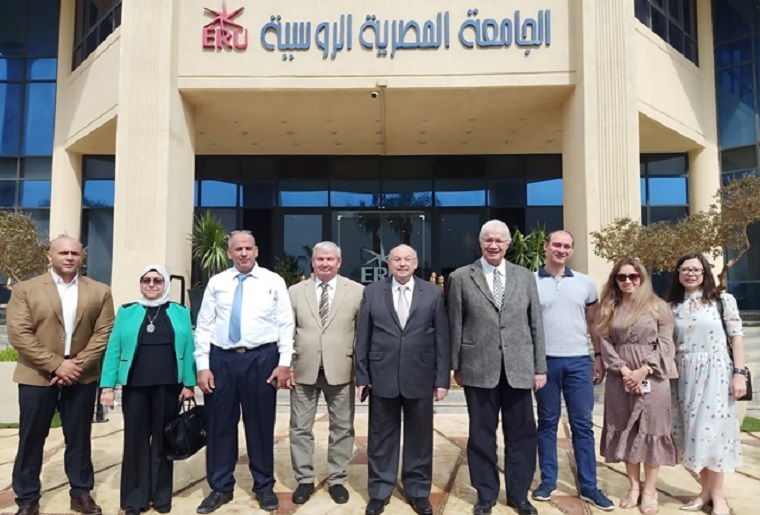 President of the Egyptian Russian University, Prof. Sherif Fakhry Mohamed Abdel-Nabi, announced that a delegation from Izhevsk State Technical University- from the Russian Federation, visited the university campus. The delegation was headed by Dr. Grigory Ivanovich Yakovlov, Head of the Department of Construction Materials, Mechanization and Geotechnology at Izhevsk University. The visit was sponsored by Dr. Mohamed Kamal Mustafa, Chairman of the University’s Board of Trustees.

The president of the Egyptian Russian University added that the aim of the Russian delegation’s visit was to consolidate relations between Izhevsk State Technical University in Russia and the Egyptian Russian University, to attend the scientific conference of the “Construction Engineering Department” at ERU Faculty of Engineering, and to discuss ways of cooperation in the field of scientific research between the two universities. ERU president pointed out that they also discussed the preparations for the 14th edition of the Conference on Nanotechnology for Green and Sustainable Construction, to be held next March in Sharm El-Sheikh, South Sinai Governorate. The conference is held in cooperation between the two universities and Housing and Building National Research Center. They also discussed special administrative and scientific issues related to the dual degree awarded to some of the Faculty of Engineering students.In the same context, Prof. Essam Khamis, Vice President of the Egyptian Russian University, explained that Izhevsk University delegation visit comes within the framework of  cooperation in scientific research between the two universities with the aim of optimizing the use of natural resources and of reducing pollution resulting from construction material industries by recycling them. Such actions would help preserving the environment through facing global problems and finding solutions such as using industrial and agricultural wastes in the field of construction, using sea water and treated sewage as an alternative to potable water in construction, and providing research solutions for sustainable development and for improving the economy.ERU Vice President talked about the scientific research status quo at the Egyptian Russian University and Izhevsk University, as the analysis indicated that the two universities were distinguished by their research in the fields of engineering, material sciences, physics, astronomy, and computer science. The global Scopus platform mentioned the two universities’ joint research published in global indexed journals.For his part, Pof. Alaa El-Batsh, Dean of the Faculty of Engineering at the Egyptian Russian University, indicated that the delegation of Izhevsk University examined the capabilities of the Construction Engineering Department, which are: “Concrete Laboratory, Material Properties and Resistance Laboratory, Roads Laboratory, and Soil Mechanics Laboratory”; in order to find out the possible aspects of cooperation in the field of scientific research. He also pointed out that the Russian delegation reviewed students’ research projects and praised their efforts. They also praised the laboratories capabilities, the workstations technical infrastructure, and the high efficiency of the faculty members.Dr. Fatma Shaltout, Head of the Construction Engineering Department at ERU Faculty of Engineering, stated that summaries of the MA and PhD theses of the faculty members as well as teaching assistants -obtained during the academic year (2021-2022) – were presented during the department’s scientific conference. These research endeavors were published in distinguished journals and conferences. Prof. Fatma Shaltout also announced that the faculty staff who have successfully finished their MAs and PhDs, or those who have successfully published their research papers, have been honoured, namely:  Dr. Omnia Farouk, Dr. Dalia Refaat, Dr. Muhammad Rabah, Dr. Heba Al-Saeed, Dr. Hany Ragab, Dr. Ahmed Ibrahim, Dr. Mirhan William, Dr. Mona Muhammad, Eng. Karim Yousry, Eng. Nancy Tarek, Eng. Amal Khaled, Eng. Iman Gomaa, Eng. Muhammad Shams, Eng. Roa Hammam, Eng. Ahmed Jamal, and Eng. Esraa Barakat.At the end of the meeting, Dr. Grigory Ivanovich Yakovlov – Head of the Department of Construction Materials, Mechanization and Geotechnology at Izhevsk State Technical University and the head of the visiting delegation- praised the scientific research presented and discussed during the “Construction Department Conference” at the Egyptian Russian University, the university infrastructure and technological facilities, the academic staff, and the professional admin staff. He also wished all the best for the department looking forward to increasing cooperation with ERU Faculty of Engineering in many scientific fields.The delegation of Izhevsk State Technical University of the Russian Federation included: “Lagar Budov, Larina Sergeevna, Zarina Sedova”, and it was accompanied by Dr. Ali Al-Refai – Assistant Prof. in the Department of Construction Engineering.It is worth noting that Izhevsk State Technical University delegation was accompanied by the university president, vice president and dean of the Faculty of Engineering in an inspection tour on campus to see the service buildings, green areas, sports stadiums, and some faculties, like the Faculty of Applied Arts. They were received by the faculty dean, Prof. Ezzedine Abdel Aziz, and staff members to show them the faculty capabilities and facilities.It is noteworthy that the Russian delegation took some memorial photos near the “Egyptian-Russian Friendship Tree” on campus. The tree was planted by the The Alumni Association of Russian and Soviet Union Universities within the framework of humanitarian cooperation between the two countries.