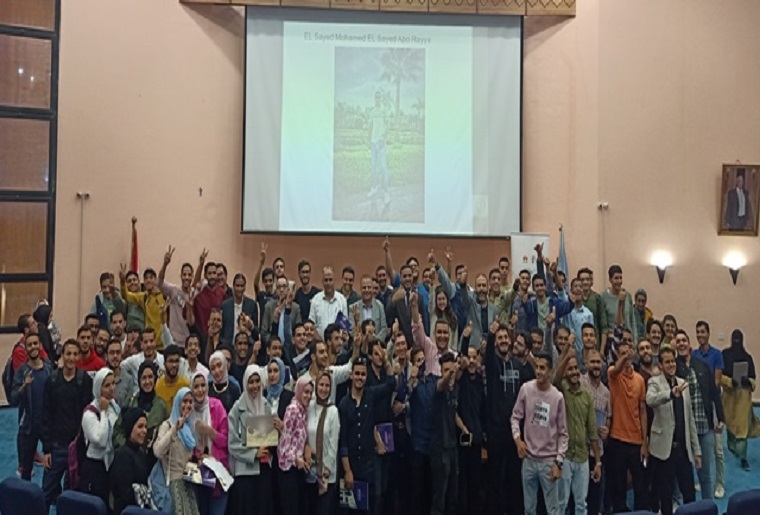 Dr. Sherif Fakhry Mohamed Abdel Nabi, President of the Egyptian Russian University, announced that the university administration, in cooperation with the international “Huawei Company”, organized an event to announce the launch of the “Huawei ICT Competition” in its fourth edition from inside the Great Conference Hall “Dr. Sherif Helmy Hall” at the University Campus in Badr City. The training courses offered by “Huawei Company” were reviewed during the event as part of the joint cooperation agreement between the two parties; To train students, graduates and graduates of other universities through the academy established at the university.. Noting that this cooperation is carried out with the full support of Dr. Mohamed Kamal Mustafa, Chairman of the University’s Board of Trustees.

In the same context, Dr. Alaa Mohamed El-Batsh, Dean of the Faculty of Engineering at the Egyptian Russian University, added that this event was held in accordance with the protocol signed with the international “Huawei company”; To create a “Huawei Academy” on campus; To train students from university faculties or graduates of other universities and academies.. Noting that holding these meetings is a great opportunity for students and graduates; To learn all that is new in “Network Engineering Technology, Cloud Computing, Artificial Intelligence, and Information Technology”, through the world’s leading companies in those fields such as “Huawei”.

For his part, Dr. Hisham Fathy, Dean of the Faculty of Artificial Intelligence and General Supervisor of the Academy at the Egyptian Russian University, explained that this meeting aims to introduce the training courses for students to provide them with the necessary skills, as well as the major competitions held by “Huawei Company”  at the international level to spread the culture of communication technology and intelligence in order to keep pace with the state’s requirements to contribute to the digital transformation in its plan until (2030).. Noting that this helps students obtain good job opportunities through the company’s nominations for companies working with it and using its technology; Especially in the fields of “Network Engineering and Cloud Computing”, which most local and international companies, both private and government, are flocking to.

In a related context, Eng. Amr Zayed, Executive Director of Huawei’s pioneering training program “ITB-ICT talent bank”, indicated that university students participating in the competition will be filtered through several tests to enter a competition and choose the distinguished among them to represent the university in a test at the level All universities of the Republic, then the students are divided into teams in the stage of competitions in the North African region and the final stage to represent Egypt in the international competition at the level of the countries of the world in Beijing, “China”, and the winning team will receive a certificate of appreciation and “Huawei” valuable awards. As well as grants to complete their studies in the fields of science “communication technology, information technology, artificial intelligence, network engineering and cloud computing.” He revealed that this year there will be a competition in three fields, not two as usual, where the competition will be in the fields of: “Network Engineering and Cloud Computing.” , the cloud, and computing”.

On the same subject, Dr. Tamer Saleh, Executive Director of the Huawei Academy at the Egyptian Russian University, revealed that among the achievements of the “Huawei Academy” on campus during the past year are the following:

1-            Training a number of faculty staff members and members of the assistant staff to be certified trainers, and the company chose two of the university’s assistant staff who were trained at the academy among the best (10) trainers in “artificial intelligence, network engineering and cloud computing” at the level of the Republic.

2-Training a large number of students outside and inside the university, close to 1,00 students and graduates so far.

3-Launching the activities of the “Huawei International Competition”, which was filtered in China for the first time on the land of the Egyptian-Russian University.

4- Three of the students received silver and bronze medals, and one student reached the                     final qualifier at the world level and got the third place in the world.

5- Choosing the university and its president to be honored in the “Huawei Ambassadors” program in a grand ceremony and choosing a student from the Faculty of Engineering; To be the first ambassador to Egypt’s public and private academies.

6- The Academy ranked second at the level of the Republic, despite its recent establishment.

7- Choosing the Egyptian-Russian University to hold the first employment forum on the university’s land for the superiority of our students. It was held on August 22, 2022.

8- A large number of graduates obtained job opportunities at Huawei through the company’s employment forum.

For her part, Eng. Donia Nasser, Executive Director of Business Development at Huawei Egypt, explained that the aim of these competitions and meetings is to create a distinguished “human capacity bank” “ITB” in the field of information and communication technology to participate in building the information technology and communication capabilities necessary to implement the digital transformation strategy in the country, and to make “Egypt” a center of excellence and a bank for ICT talents in the region and the world, as well as building a link between distinguished capabilities and the labor market.. Eng. Donia presented the steps for registration in the competition and the important stages and times during the competition, which will continue until the middle of next year (2023).

It is noteworthy that Eng. Amr Zayed, Executive Director of the Huawei Training Program, honored Dr. Sherif Fakhry Mohamed Abdel Nabi, President of the University, for the good cooperation between the university and Huawei; As a result, the university ranked third in the world. Then Dr. Alaa Al-Batsh, Dean of the Faculty of Engineering, and Dr. Hisham Fathy, Dean of the Faculty of Artificial Intelligence, honored the members of the company with the university’s shield “on the occasion of two years of cooperation between the Egyptian-Russian University and Huawei International”, and it was received by Engineer Amr Zayed. During the ceremony, nearly one hundred male and female students who passed some of the courses offered by the Academy during previous periods and received certificates of appreciation were honored.                           It is worth noting that at the end of the ceremony Dr. Tamer Saleh, Executive Director of the Huawei Academy at the university, honored the members of the organizing team and announced the launch and establishment of a new group called “Huawei Talents Group.” After that, the ambassador of the Huawei Academy for the university will be chosen. The names of the organizing team are:” Mustafa Ali Mustafa Anwar, Mohamed Nagy, Ahmed Wagih, Abd- Allah El-Sayed, Menat Allah Al-Hadidi, Ammar Abd- Elhalim,  Dina Nasser, Ahmed Fares, Mustafa Al-Ghamry, Nourhan Hossam, Nidaa Muhammad, Tasnim Ibrahim, Al-Sayed Muhammad, Muhammad Ahmadi, Muhammad Samir, Esraa Saad, Muhammad Qaoud, Muhammad Mustafa, Mustafa Ahmad, Ahmad Al-Sayed, Rawan Gharib, and Sherif Muhammad. “All the details of the competition can be found on the following link: https://e.huawei.com/en/talent/news/#/details?consultationId=2545

To follow the most important academic events at the Egyptian Russian University and the latest news of the courses, join them and obtain free scholarships at the Academy, please visit its Facebook page: https://www.facebook.com/groups/311213920764161