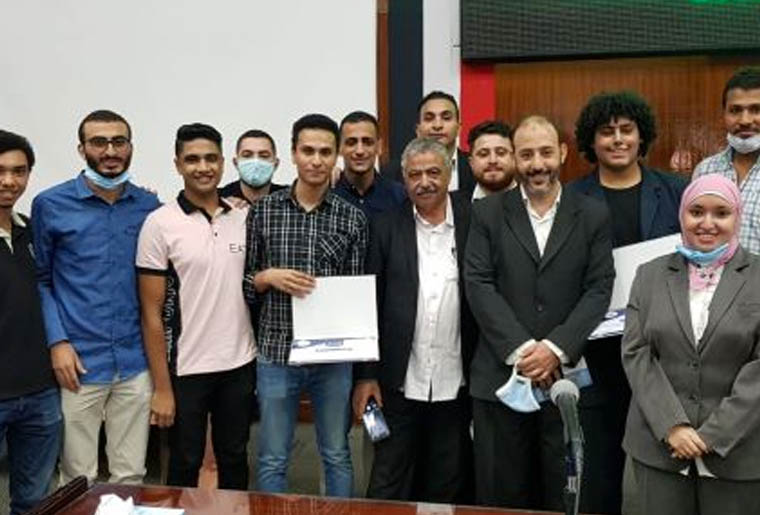 The Faculty of Engineering at the “Egyptian Russian University” in Badr City achieved the 6th and the 10th places among (56) teams in the “Egyptian Space Agency” competition for the year (2020), within the summer training program “Space Science and Technology” for the Egyptian universities students in cooperation with “Benha University, and the funding of the Egyptian Space Agency under the supervision of Dr. Mohamed Al-Qawsy, CEO of the agency; To become the only university in which two teams participate and take place among the ten teams that are working on creating a satellite for the universities.

Prof. Sherif Fakhry Mohamed Abdel-Nabi, President of the Egyptian Russian University, congratulated the Dean of the University’s Faculty of Engineering, faculty staff and students, for the university’s acquisition of these advanced positions in the “Egyptian Space Agency” competition, which came as a result of continuous work and effort. Confirming the continuation of The university administration, in support of educational competitions and advanced scientific research for all university faculties students, because this has a great impact on the renaissance of Egypt, our beloved country, nations, and the advancement of societies. This success comes in accordance with the protocol signed with the Egyptian Space Agency and the university in (2019).

The President of the Egyptian Russian University added that the fact that the Faculty of Engineering obtained these advanced centers in an important competition in the Egyptian Space Agency, which exceeds many engineering faculties in great universities, indicates the distinction and quality of education provided by the University’s Faculty of Engineering, and its results appear through these educational competitions.

He revealed that this is due to the distinguished elite possessed by the “Faculty of Engineering” in the university from the faculty members and their assistants, which made it achieve advanced positions; Given its pioneering role in education and scientific research.

In the same context, Dr. Alaa Al-Batsh, Dean of the Faculty of Engineering at the Egyptian Russian University, said that the training of students for the competition lasted for two months, the two teams of the College of Engineering at the university submitted two reports after the end of the theoretical training in which they obtained the full mark, and after their success in training they presented two final projects. Pointing out that the first team, the “Communications Engineering Program”, was made up of some students of the Faculty ’s communications engineering program, namely: “Heba Atef Muhammad, Fatma Ashraf Rashad, Ahmed Hassan Zakaria, Mahmoud Ibrahim Hassan, Muhammad Abdul Rahman Fayed.”

They presented a project of creating communication system between the earth station and the satellite, and it won the “sixth” position among (56) participating teams and (400) students in the competition.

Dr. Alaa Al-Batsh indicated that by this, the Faculty of Engineering at the “Egyptian Russian University” would be the only college that received two chances out of the “ten” grants offered by the “Egyptian Space Agency” to participate in the establishment of a “Cube Satellite” for universities, as part of their graduation project. Pointing out that Dr. Ahmed Seddik and Dr. Tamer Saleh supervised the training of students from the university, where they directed and followed students during the training period until they obtained these advanced positions. Link