ERU announces the results of the “Broadcaster Competition” 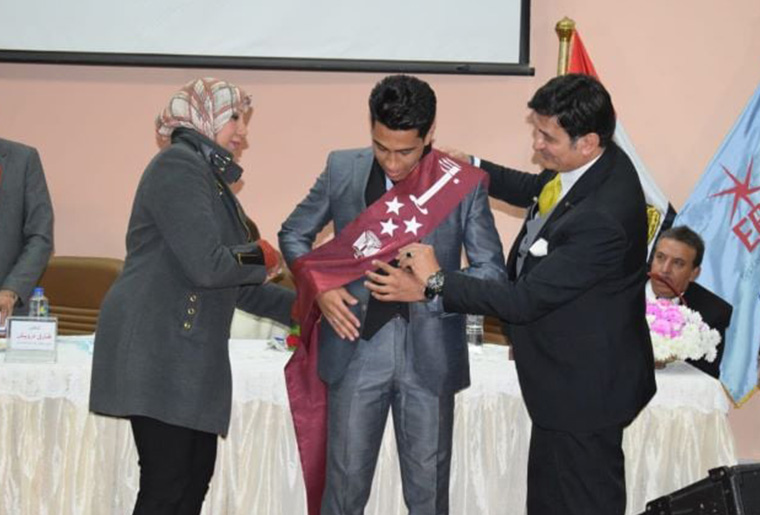 The Egyptian Russian University, in cooperation with the Arab Academy for Media Arts, organized the TV and Radio Broadcaster Competition, to discover the talents of radio presenting among students and graduates of the Faculties of Oral & Dental Medicine, Pharmacy, Engineering, College of Management, Professional Technology and Computers on campus.

Dr. Sherif Fakhry Mohamed Abdel-Nabi, President of the Egyptian Russian University, added that the university administration is keen on the multiplicity and diversity of activities for students of the university’s faculties, especially in cooperation with specialized agencies and large entities with experience to acquire the students some new skills and satisfy their hobbies. He indicates that the university will continue this year in carrying out all its student activities, “sports, cultural, artistic, and family activities,” in line with the circumstances the country and the world are going through amid strict precautions to preserve the safety of students due to the spread of the new Corona virus.

In the same regard, Dr. Mustafa Al-Adwar, president of the Arab Academy for Media Arts, announced that “Egyptian Russian University” in Badr City is the first university in which the ” Broadcaster Competition” is being held in its first edition. He praised the fruitful cooperation between the Academy and the Egyptian Russian University in the success of the ” Broadcaster Competition” for the year (2020) and the impartiality of the jury, that consists of leading artists, media stars and academics, in the competition to select the winners.

Accordingly, Nihal Anbar, a member of the jury in the “Broadcaster Competition”, directed her speech to the students in which she said that being a profession in the field of media is not an easy thing at all as the presenter must be polished with knowledge and he must closely follow-up new things in various fields. Moreover, she added that the broadcaster (presenter) must send a documented message or information through his media window in order not to lose his credibility in front of the viewers and make them reluctant to watch him as fake news destroys his career.

At the end of the ceremony, Dr. Hana Abdel Rahman, the pioneer of student activities at the Egyptian Russian University, presented the university’s shield and certificates of appreciation to all members of the jury for their outstanding efforts: “The actor Tariq El Desouki, the great artist Nihal Anbar, the journalist Mustafa Al-Adwar, Chairman of the Board of Directors of the Arab Academy for Media Arts, Professor Tariq Darwish, President of the Egyptian Businessmen Association, Dr. Rania Yahya at the Academy of Arts and a member of the National Council for Women, Dr. Hasnaa Al-Demerdash, Professor at the Faculty of Archeology, Misr University of Science and Technology, Mirna Emam the FM Presenter and etiquette expert, Professor Mostafa Aliou, Chairman of the Board of Directors of the United Smartphone Company and the presenter of the competition prizes. The competition was organized by Isra Samir, Director of public relations at the Egyptian Russian University, and Mohamed Abdullah, Director of youth welfare at the Egyptian Russian University.

Dr. Mahmoud Abdel Aziz, the Coordinator of Political Communication and National Security at the Egyptian International Federation for Combating Terrorism and Extremist Thought, and a member of the Youth Committee of the Leaders Foundation, Dr. Maysa Ashmawy, Chairman of the Board of Trustees of the Leaders Foundation for Administrative Sciences and Development, the writer and media person Abeer Helmy and the President of the Harmony Festival of Hymns and the singer Muhammad Tariq, a member of the Arab Music Ensemble participated in the ceremony .

In cooperation with the Arab Academy for Media Arts