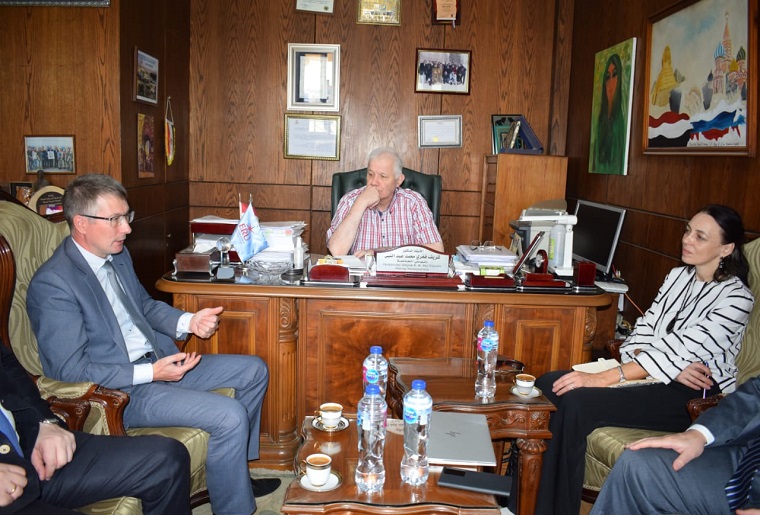 Prof. Dr. Sherif Fakhry, president of the Egyptian Russian University received Mr. Marat Gatin, Director of Russian Cultural Centers in Egypt, Mr. Denis Bronnikov, expert of the Russian House in Cairo and responsible for scholarships from the Russian government and cooperation with Egyptian universities, and Ms. Oksana Hassab El- Nabi, coordinator of cultural events at the Russian House in Cairo. The two sides discussed ways of cultural cooperation between them and what the Russian Cultural Center can offer in terms of grants, training courses, and events to develop the knowledge and skills of university students.
Dr. Sherif Fakhry presented the Russian delegation with a general view of the Egyptian Russian University and explained that the university was established in 2006, and reviewed the university’s excellence in its various programs such as the digital banking and financial technology program, the digital political science program, and the supply chain program. He added that the number of students who obtained double degrees with a Russian university in the field of wireless communications reached 181.
He also noted the names of the university’s faculties namely, Faculty of Engineering, Faculty of Pharmacy, Faculty of Administration, Economics and Business Technology, Faculty of Artificial Intelligence, the College of Fine Arts, and the College of Applied Arts. He also pointed out that the university is waiting for the decision to begin studying at the Faculty of Al-Alsun and Technical Languages.
Then prof. Dr. Essam Khamis, Vice President of the university, presented the current status of scientific research at the university which amounted to 601 researches published in internationally indexed journals and there was a clear increase in publication during 2021 by 84% compared to the publication in 2020. He indicated that the university was distinguished by its researches in the fields of chemistry, pharmacy, engineering, biochemistry and materials science, physics and astronomy, medicine, computer science, and dentistry. Noting that 43.1% of its researches was published in journals with advanced order of Q1 during the period of 2019 – 2021. The citations for each research reached 6.5 during that period. Then Dr. Essam presented the total number of researches published between Egyptian universities and Russian universities during the time period 2005-2021, which amounted to 1080 researches. It has been noticed that there has been a clear increase in joint scientific research during the last three years in the fields of computer science, chemical engineering, agricultural sciences, earth sciences, biochemistry, and others.
Finally, the Russian Cultural Center donated a set books written in Russian language to the university library.