Sponsored by the Ministry of Social Solidarity The Egyptian-Russian University organizes a “Conscious Youth Campaign” for the fifth year. 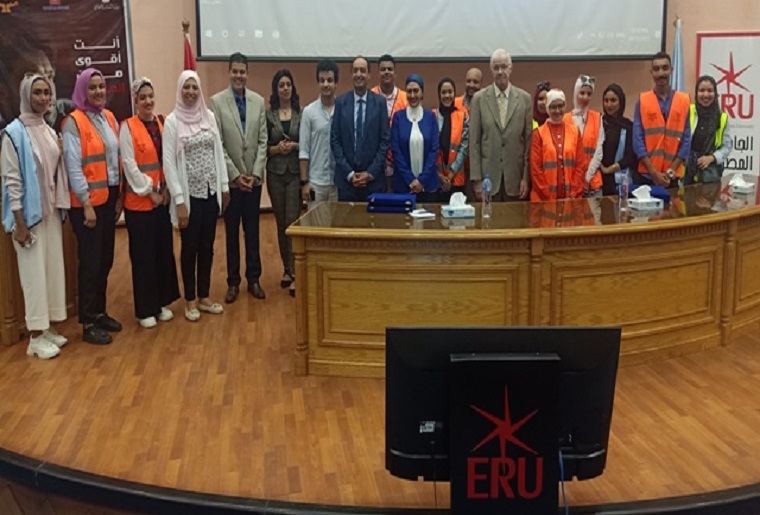 Sponsored by the Ministry of Social Solidarity The Egyptian-Russian University organizes a "Conscious Youth Campaign" for the fifth year.

Dr. Sherif Fakhry Mohamed Abdel Nabi, President of the Egyptian-Russian University, announced that the administration of the university is organizing a “conscious youth campaign” for the fifth consecutive year from 18/10 to 2/11/2022, within the framework of social awareness activities at the university and the enhancement of the role of youth in the effective and positive participation in community awareness about the dangers and harms of smoking, drug addiction for individuals and society for the sake of the contribution to  the  efforts of the state ,and the implementation of the National Plan to combat drug abuse. He pointed out that the campaign is supported by Dr. Mohamed Kamal Mustafa, Chairman of the Board of Trustees of the University in cooperation with the Ministry of Social Solidarity and the Fund for Combating and Treating Addiction.

The  President of the Egyptian-Russian University stated that the aim of establishing these campaigns is to refine the personality of students and provide them with skills, experiences, and create the sense belonging  to the university and the surrounding  community in a way that  ameliorate students’ ecstasy, happiness and satisfaction. This in turn will contributes to the achievement of  psychological balance for them  , and it also contributes to qualify them to face the current and future challenges in their personal, social and practical lives since they are the human element  For the route of development and leadership of the homeland

In the same context, Prof. Dr. Amr Osman, Assistant Minister of Social Solidarity and Director of the Fund for Combating and Treating Addiction, praised the role of the “Egyptian-Russian University” in serving the community and its effective and positive effect on students, whether within campus or schools in the surrounding cities. He revealed that most of the recent and strange incidents in the Egyptian society are largely related to drug issues, especially the synthetic “chemical” and its widespreadness will lead to destruction of the Society. He pointed out that the importance of the campaign for youngsters and students is to introduce them to the importance of the next stage of their future and the magnitude of the challenges that they may encounter. In addition, the issue of combating  drug abuse and addiction is a national issue which should be implemented protect young people from falling into the clutches of addiction.

In a related context,  Prof. Dr. Hana Abdel Rahman, the pioneer of student activities at the Egyptian-Russian University, declared that the campaign includes interactive seminars within the university, visits to some schools in the cities of Badr and  Al-Shorouk, and visits to some factories in Badr City, in order to activate the societal role and the sense of commitment to the social responsibility of the university. Moreover, these campaigns and seminars help raise the level of awareness of  youngsters and students and address them about the “dangers of addiction and drug abuse.”

From her side,  Prof. Dr. Safia El-Kabbani, Advisor to the President of the Egyptian-Russian University of Arts, explained that the university’s youth and school students are the main element in community awareness and that the recent  “Conscious Youth Campaign” includes  various artistic activities besides the practice of sports activities, as these activities are important to build a balanced and effective personality that can bear a lot of responsibilities and encounter a lot of hurdles.

Within the same context, Dr. Ibrahim Askar, Director General of Preventive Programs at the Fund of Combating and Treating Addiction, stressed that college and school students are the “effective force” that represents the roots of the future of the state; they are considered to be the backbone of the whole state, and they are the hope of a bright tomorrow as well as they must have a clear imprint in their society in order to rise in order to get flourished. He adds that the  fund provides treatment services free of charge in complete confidentiality through the hotline (16023), along with (22) hospitals nationwide that provide rehabilitation, treatment and support services.

In a related context, Dr. Mohamed Mustafa, an expert in forensic medicine at the Ministry of Justice and supervisor of drug detection campaigns, said that the most important means of combating drugs are not only security by preventing the exposure of drug traffickers to them; but the best way is to combat the demand for narcotic substances by increasing awareness among young people about the risks and harms that result from their abuse, and their negative effects on their lives, families and society; hence, from here comes the importance of such educational and awareness campaigns and seminars. He also stresses on the dangers of narcotic substances of all kinds, saying; “Drugs do not only affect the addictives , but their effects extend to cause social and economic damage to the surroundings around him.”

From her side, Ms. Amira Rajab, Assistant Supervisor of the Department of Preventive Programs at the Addiction Control and Treatment Fund, hinted that one of the objectives of the Fund of Combating and Treating Addiction is  “raising awareness of the dangers of drug abuse and addiction among the groups of society,  in addition to assisting in the enactment of legislation and encoding laws regarding the issues of drug abuse and addiction, intensifying media campaigns and activating the Media Observatory, early detection and analysis, enhancing international cooperation and exchanging experiences in the field of prevention, treatment, and rehabilitation.”

The “awareness of Youth Campaign” at the Egyptian-Russian University was attended by: “Dr. Hisham Fathy, Dean of the Faculty of Artificial Intelligence at the   University “ERU”, Prof. Tarek Bilal, Chairman of the Board of Trustees of the Educational Department of Shorouk, Badr and Capital Gardens, Dr. Asma Alaa El-Din, Consultant of Psychotherapy, Dr. Suha Samir, Director of the Social Solidarity Unit at the University, and Mohamed El-Taher Al-Critic.

Sponsored by the Ministry of Social Solidarity The Egyptian-Russian University organizes a "Conscious Youth Campaign" for the fifth year.