In cooperation with the Arab Academy for Media Arts, Learn about the Results’ Details of the Announcer Competition at the Egyptian Russian University.. Video 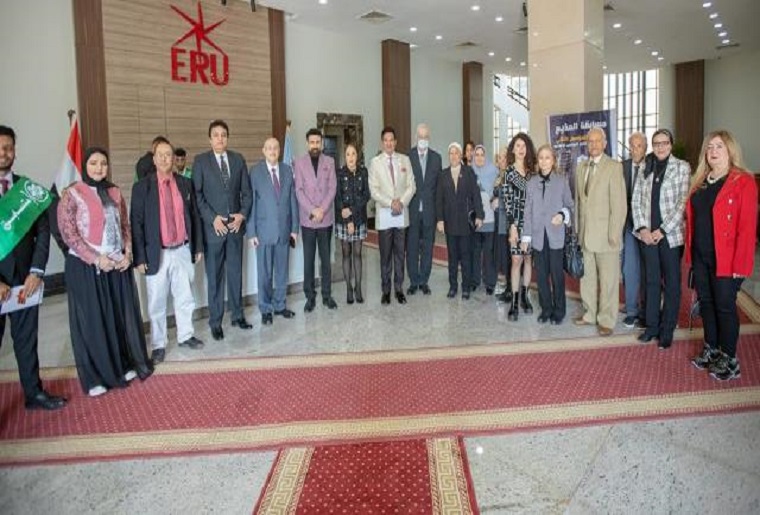 In cooperation with the Arab Academy for Media Arts, Learn about the Results' Details of the Announcer Competition at the Egyptian Russian University.. Video

Dr. Sherif Fakhry Mohamed Abdel Nabi, President of the Egyptian Russian University, announced that the TV and Radio Announcer Competition was organized, in its second season, to discover the talents of media presentation among students of the Faculties of Oral and Dental Medicine, Pharmacy, Engineering, Management, Economics and Business Technology, Artificial Intelligence, Applied Arts, Al-Alsun, and Fine Arts on campus. The competition was held in cooperation with the Arab Academy of Media Arts, under the auspices of Dr. Muhammad Kamal Mustafa, Chairman of the University Board of Trustees.
ERU President thanked the attendees and the members of the jury who are great stars of art and media in Egypt and the Arab world for their presence on campus participating in one of the various student activities that the university administration is keen to hold. He emphasized that the university has many talents and honorable role models, and that such activities contribute to stimulate honest competition and diligence among students. These activities also shed light on good models which help in discovering talented people in all fields.
In the same context, the great journalist, Dr. Mustafa Al-Adwar, President of the Arab Academy for Media Arts, announced that the Announcer competition is being held for the second time at the Egyptian Russian University in Badr City.. praising the fruitful cooperation between the Academy and the Egyptian Russian University, the success of the competition in (2022), and the impartiality of the jury which consists of leading artists, media stars and academics.

On the same subject, Mr. Tariq El-Desouki, head of the competition jury, announced that (27) male and female students from various ERU faculties participated in the competition, and after many tests, 10 students were selected based on their strength of character, general information, culture, appearance and interactive characters, as well as their moderate and distinctive voices. He announced that the student Abd al-Rahman Reda from the Faculty of Engineering was awarded the title of “Top Male Announcer” from the qualifiers top ten, whereas the title of the “Top Female Announcer” was given to the student “Malak Amr” from the Faculty of Management, Economics and Business Technology. The award of excellence was awarded to the student “Mena Allah Wardani Al-Hadidi” from the Faculty of Engineering, and to the student “Ziyad Ahmed Salem” from the Faculty of Management, Economics and Business Technology. They both also received certificates of appreciation in addition to some gifts.

In a related context, the mega star Sherine, a member of the jury, sent a message to the students in which she said that the most important characteristic of the announcer is that he/she should have an interactive character. She also stressed that any broadcaster should only tackle documented issues so as not to lose credibility because of any fabricated news disaster which can ruin his/ her future career.

The great broadcaster, Osama Mounir, stressed that whoever wants to become a media professional should boost his/ her talent with knowledge and continuous follow-up with various fields, and to be a good reader to master the Arabic language. In addition, he/ she should regularly develop his/ her own skills. He advised the students applying for the competition to express themselves spontaneously and to avoid imitating or impersonating any media personalities in order to ensure success and distinction.

In cooperation with the Arab Academy for Media Arts, Learn about the Results' Details of the Announcer Competition at the Egyptian Russian University.. Video