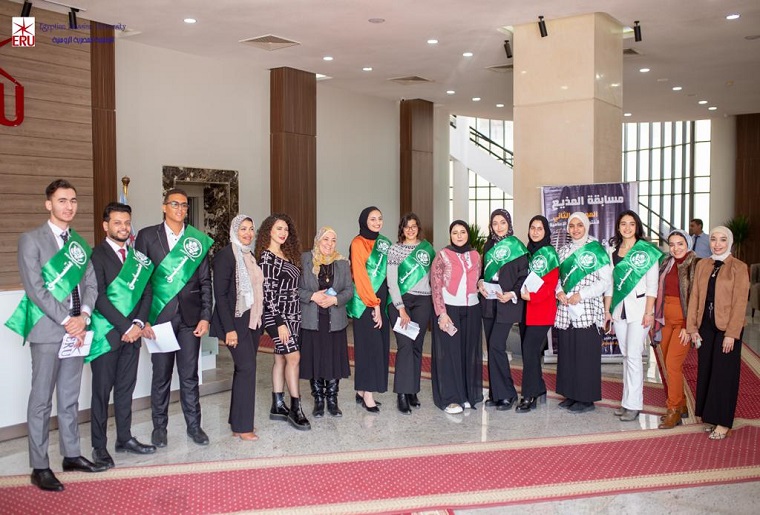 Under the auspices of Prof. Dr. Sherif Fakhry, President of the University, and in cooperation with the “Arab Academy of Media Arts”, the final competition and the closing ceremony of the broadcaster competition in its second season were held in the university theater, where (10) male and female students from various university faculties competed for the title of university broadcaster. The jury consisted of a group of artists, media stars and academics, as it included the distinguished artist Tariq El-Desouki, the great artist Sherine, media star Mustafa Al-Adwar, chairman of the Board of Directors of the Arab Academy for Media Arts, Mr.Osama Mounir, the media star Ms Nancy Ibrahim, the broadcaster on Egyptian TV, the media and journalist Ayman Khalil, deputy editor-in-chief of Al-Ahram. The title of “broadcaster” was won by the student Abdul Rahman Reda from the College of Engineering, and the title of “broadcaster” was also won by the student Malak Amr from the College of Management, Economics and Business Technology. The Excellence Award was awarded to the student Menna Allah Wardani from the Faculty of Engineering, and the student Ziyad Ahmed Salem from the Faculty of Management, Economics and Business Technology.
The university choir, which includes a distinguished group of students from various faculties of the university, presented a group of songs that received the interaction and admiration of the audience.
Best congratulations to the winning students.