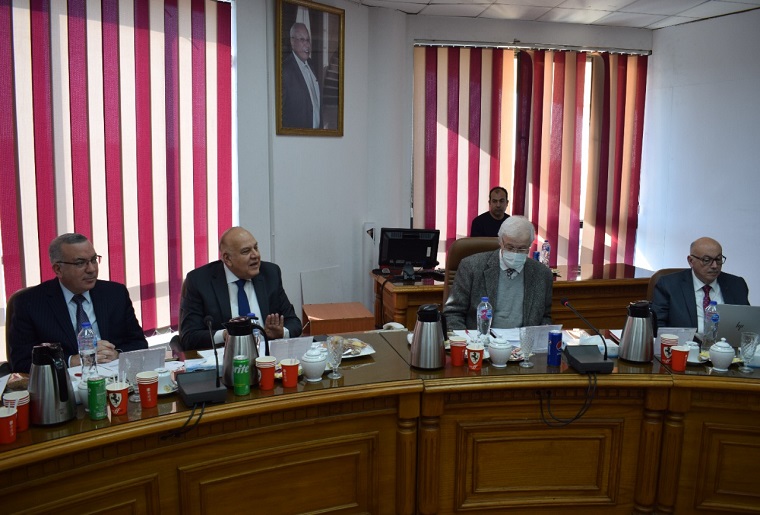 The Council of the Egyptian Russian University was held under the chairmanship of Prof. Sherif Fakhry, President of the University; the session took off by thanking the adjunct members of the Council whose contract has expired, and extending congratulations to the newly joined adjunct members of the Council. The adjunct members of the Council who attended and participated in the fruitful discussions are Prof. Amr Ezzat Salama, Secretary General of the Association of Arab Universities and former Minister of Higher Education, Prof. Mohamed Hamza, Professor at the Faculty of Science, Ain Shams University, Prof. Enas Abdel Majeed, Professor at the Faculty of Medicine, Assiut University, and Prof. Essam Khamis, Vice President of the University, and the deans of the faculties. The points included in the agenda were discussed such as adopting of a self-evaluation form for faculty members, presenting an analysis of the current position of scientific research at the university, announcing the names of distinguished scientists in research at the university, and clarifying a map of the distribution of published research among the university’s faculties. The Council recommended informing faculty members and the assisting staff in all faculties of the results of this analysis to pursue and motivate publishing in classified scientific journals. It was also emphasized to follow up on the weekly research activity of the university. Moreover, the report submitted by the Quality Assurance Center on the faculties’ position in quality and accreditation was reviewed and approved. Last but not least, the university’s activities that were implemented in the previous period, and the university’s plan of events and activities during December 2022 were highlighted.